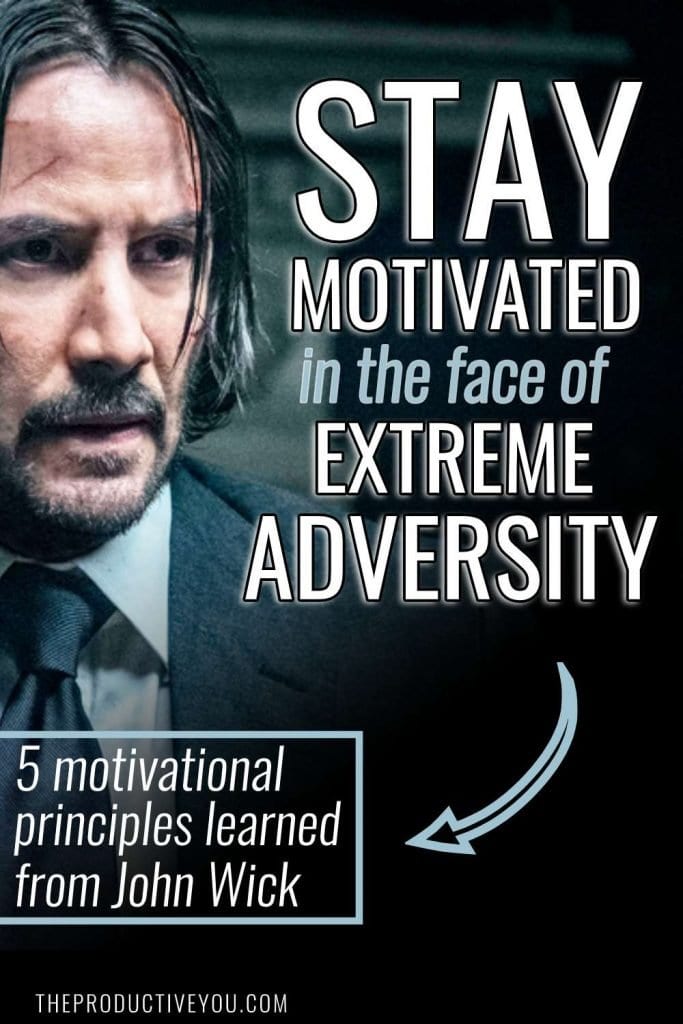 Here’s a scenario that no one seems to talk about (but I’m betting has happened to you on more than one occasion): picture this, you’re mentally preparing yourself for an upcoming task – you don’t necessarily want to do this task, but you know have to – and after scraping the very bottom of your willpower fuel tank, you finally extract the needed motivation to do it.

But then… mere days, hours, or sometimes even minutes later, ~poof!~, it’s gone. You lose all motivation and, in the face of defeat, you languorously melt into your cushioned chair, promising yourself that you’ll try harder “next time.”

It’s a debilitating feeling, and it happens all too often (at least in my experience.)

That’s why this article is all about how to stay motivated, even when life gets hard (inspired by our good friend John Wick.)

Related: How to Have a Work Ethic Like Samuel L Jackson

What can You Learn from John Wick?

“John is a man of focus, commitment, sheer will.”

There are a million and one articles on how to get motivated, but very few on how to stay motivated, especially in the face of adversity.

And John Wick is perhaps the most motivated character (who also faces the most adversity) to ever grace the silver screen.

And I know it’s just a movie, but as someone who is obsessed with productivity John’s level of determination just speaks to me every time I watch the films.

And there’s a lot to be learned from fictional characters. So, for this article I’ve dissected John’s actions and found 5 techniques that he uses to stay motivated despite overwhelming odds.

I think we can all agree that John’s primary motivator throughout the majority of the franchise is retribution.

To summarize (spoilers incoming): John’s wife dies from some unknown illness and he gets really, really sad. Shortly after her funeral he discovers that she left him a puppy – a final gift so that he could “grieve un-alone.”

Then, some dick-head (Iosef, son of John’s former employer and big-daddy-mob-boss Viggo) kills his dog and steals his car. John goes full superman and hunts down Iosef, killing 77 bad guys (128 and 94 in the second and third films respectively) and sustaining numerous injuries along the way.

So yeah, he’s in it for revenge. I think anyone would feel the same way. But, again, what’s impressive is that his motivation never wanes despite him literally almost dying on numerous occasions.

The first principle John uses to stay motivated is he adjusts his environment.

Specifically (in the first film), he checks into the “Continental”, the notorious assassins hotel that forbids business from being conducted on its grounds, instead of staying at his home.

This is a brilliant wartime strategy because it’s often best to keep the initiative in your own hands instead of letting your opponent dictate the pace of battle (and, make no mistake about it, John is definitely at war.)

John quickly realizes that if he stays in his own home then he will spend all of his time defending himself from assassins rather than going on the offensive (a rather de-motivating situation, don’t you think?)

Now, when it comes to your own personal motivation, you want to do much of the same. That is, you don’t want to let your environment poison your motivation with negative influences. Instead, it’s best to simply adjust your environment to one that will help you, rather than hurt you.

In my own home environment, there are plenty of things that will negatively affect my motivation while I’m working: things like television, chatty people, and the general sense of non-urgency I feel when I’m at home.

Thus, I make the conscious decision to change environments when I’m working.

Related: How To Stay Consistent and Avoid Failure

These influences may be a family member who is discouraging you from following your dreams, a social circle that thrives on gossip, or even something as simple as a disorganized room or home that makes you feel anxious.

Now, you don’t have to check into the Continental like John does, but you do have to adjust your environment so that you mitigate your negative influences as much as possible.

Motivational Principle 2 Be Encouraged by Failure

The second principle of John’s motivation is that he is encouraged, rather than discouraged, by failure.

Throughout all three films John gets the living shit beaten out of him. But every time he gets hurt, he pulls a WWE Superstar Wrestling Move and is blessed with a sudden burst of motivation that allows him to triumph over his opponent.

If you don’t know what the WWE is then that example probably doesn’t make sense… Just know that when John gets knocked down, he gets back up twice as strong as before.

And this is an extremely important principle when it comes to motivation, because, in all likelihood, you’re going to fail a lot more than you succeed. And I know that failure can be really disheartening, especially when you fail at something that you really care about (trust me, I know.)

But, take it from John, when you get knocked down you have to be able to bounce right back up again.

Put another way, you must to transmute your failure into a sort of motivational fuel.

You can do this by realizing that your failure is a natural learning mechanism that is instinctually teaching you to avoid similar outcomes in the future.

Just think about the last time you put your hand on a hot stove – in that instance you technically failed at protecting your body from harm, but as a result you instinctually learned to never touch a hot stove again.

Also, embrace the idea that – if looked at from the right perspective – failure gives you a sense of purpose, or an enemy to conquer.

So, whenever you experience failure, act like John and embrace it. Because if you let it drag you down then you won’t stay motivated for very long.

As a result of the injuries we talked about in the last principle, the next technique that John uses to stay motivated is that he takes time to recover.

In my opinion, this is probably the most overlooked motivational principle out there. Because, oftentimes, we think we can “brute force” our way through any situation.

In my case, I often get stuck in the “tough guy” mentality where I think that I can’t take a break, and that I have to keep working and grinding until I literally have nothing left.

In hindsight, and after re-watching the John Wick movies, it’s obvious that this isn’t true.

Throughout the films we observe John visiting the doctor so that he can heal his wounds. Afterwards, John attempts (although he is often not successful) to rest. John knows that if he wants to stay motivated and be in “tip-top-shape” then he has to respect his body and honor his recovery.

Now, your recovery routine probably won’t include visits to an assassin’s doctor. But, regardless, you must make a conscientious effort to rest and enjoy life. Because if you constantly over-work yourself, then you won’t stay motivated for very long.

This principle applies more so to the workaholics out there, but, nonetheless, I think it’s a very important principle for everyone to consider.

Motivational Principle 4 Connect Your Task to a Core Value

The fourth principle that John Wick uses to stay motivated is that he connects his task to a core value (a deep-rooted inner desire or belief.) For John, this value is the need to remember his wife; that is, he is literally staying alive for the purpose of honoring the memory of his late wife Helen (pretty heavy, huh?)

This principle is a very well-researched and documented phenomena. Scientists have found that when people mentally associate a task with their core values, they exhibit much higher levels of motivation.

So when you start your next task, take some time to think about why you’re doing that task, and how it connects to your core values.

And then periodically remind yourself of that connection whenever you start to feel your motivation getting weaker.

This principle is the most powerful tool in John’s arsenal, and it’s perhaps the one thing that allows him to display super-human levels of motivation.

In short, mentally relate your next working task to a value that’s very important to you.

The final principle that John uses to stay motivated is that he follows a moral code.

This principle is best explained by the following short clip, so do me a favor and watch the video here.

Did you watch it?

Because what I take from it is that John is, ultimately, a good guy. In other words, he doesn’t kill Francis because he knows that his death is unnecessary and avoidable.

If you watch the films carefully, you’ll notice that John only kills for the purpose of defending himself or the honor of his wife.

This principle is important because it’s very hard to stay motivated if you can’t look yourself in the mirror.

In applying this to your own life, think about what your moral code is and then try to abide by it at all times.

For example, part of my moral code includes being nice to other people. And if given the opportunity to, say, double my business at the expense of someone else’s happiness, I wouldn’t take it.

Now, taken together, all of these principles will help you stay motivated, even when life gets hard. And the only one you’ll have to contend with is John Wick himself. Good luck.

Related: The Work Ethic of the Most Successful Actor of All Time