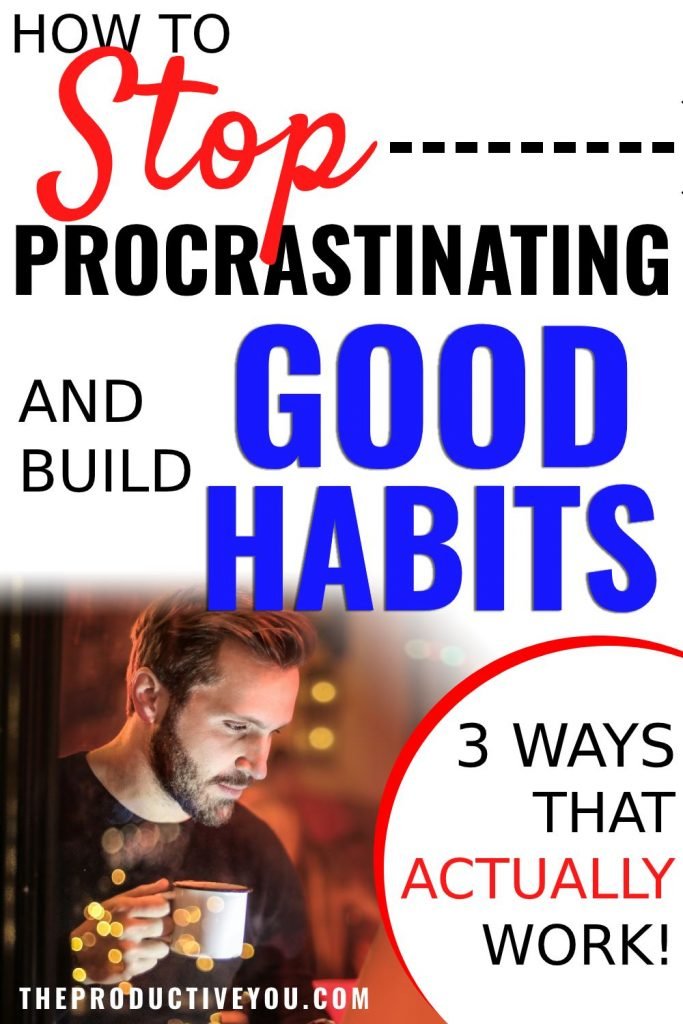 We all have at least one good habit we’d like to start, but for some reason never do.

Maybe yours is meditation or exercise or finally learning a new language.

Regardless, it seems like procrastination is always waiting just around the corner.

It’s like when you’re enjoying a steamy shower and receive divine inspiration to learn more about greek mythology (because, why not!?), but the moment your foot leaves that porcelain tub the motivation dissipates faster than the fog on your bathroom mirror.

It’s a problem, and something’s gotta give.

So in this article I analyze 3 of the biggest reasons why you procrastinate building good habits, and tell you how to Hulk smash those reasons back to Hades.

This is probably the oldest procrastination excuse in the book. But is it really true?

Take a moment and think about what you did yesterday; try to recall every minute from when you woke to when your head hit the pillow.

Seriously, think deeply about it.

Can you find at least 5 minutes of idle time where, with just a little more energy and a little more focus, you could’ve done more?

If you can’t then I honestly don’t believe you.

In 2019 the world spent an average of 144 minutes per day on social media, and in 2018 Americans spent over 4 hours per day watching TV.

In other words, you have the time, you just feel like you don’t because it’s being wasted on unnecessary activities and mismanaged energy.

So here are three solutions:

Commit to making more than zero progress in your habit every day. That might mean only doing one push up, or learning one new word, but so long as you’re doing something you’re succeeding.

Don’t try to change your entire life in one fell swoop. Instead, start with Non-Zero Days and then work your way up each week. The best part about this method is that you don’t have to go bonkers cutting out social media or television just to find free time. For now, all you need is 5 minutes.

Use this spreadsheet to give each of your tasks a “Priority Rating,” and do the tasks with the highest rating first. This will ensure that you’re not wasting precious energy on unimportant tasks.

This is just a small sample, the list of “successful failures” is probably long enough to reach the moon and back.

When it comes to building new habits, though, the prospect of failure is intimidating. It entagles your thoughts like so many cobwebs in an abandoned house, and manifests through statements like “it’s too hard to learn a new language” or “I’m just the type of person that can’t lose weight very easily.”

And sometimes even a formidable list of “successful failures” isn’t enough to ignite the tinder of action.

But that’s ok! There is a solution.

In behavioral economics a principle known as hyperbolic discounting states that humans have a tendency to seek small immediate rewards over larger future rewards.

Hyperbolic discounting is the reason why you procrastinate building new habits.

Sleek oiled abs and a firm booty sound good in theory, but those are future rewards, and on their own they stand little chance against immediate “rewards” like salted chips or sweet candy.

The only way to beat hyperbolic discounting is to actively think about it, and to plan for failure.

You see, most people try to stop procrastination after it becomes a problem. If, however, you have a solution ready before it starts, then you’ll be much better off.

So think ahead and formulate a plan. Write down exactly what future-you is going to do when the insidious tendrils of fearful procrastination start slithering into your skull.

For more examples read up on Better Breaks.

And remember, if Elon Musk, Stephen Speilberg, and Walt Disney (to name a few) were major failures, then there’s really no shame in it. It’s normal and there’s nothing to be afraid of.

I used to have a major problem with sweets (and admittedly still do from time to time, but it’s nowhere near as bad as it used to be.) It wasn’t uncommon to find me munching on M&Ms and Oreos in lieu of actual food.

I used to think that I simply had a propensity for sugar, a natural and insatiable sweet tooth.

And then one evening, while studying for a particularly stressful exam, I caught myself reaching for the pack of Reese’s sitting adjacent.

Like some low-budget drama film protagonist I had a flash of insight and realized that the majority of my sweets consumption didn’t “just happen” whenever, but was primarily a stress response.

So, underslept, over-caffeinated, and majorly stressed, I devoured that entire bag of Reese’s.

But ever since then I’ve understood that the best way to combat my sweet tooth isn’t to “will” myself through brute force, but to appropriately manage my stress and sleep schedule beforehand.

You see, when we procrastinate there’s often a reason that goes deeper than just being lazy or undisciplined.

In my case I was trying to stop a bad habit but the principle applies to starting a new habit just the same.

So take a few minutes and think about why you’ve been unable to start building that new habit. Is there another, deeper, reason beyond a simple lack of time or a fear of failure?

For example, maybe the deeper reason why you haven’t gone to the gym is because you abhor the commute, have a strong dislike of crowds, and are grossed out by germs.

Once you discover the reason (or reasons) you can find alternatives like an at-home workout app.

Finding your deeper reason(s) is a surprisingly intimate practice. They may not always be obvious, but once you discover them I promise that it’s a very profound experience.

Next Up: 5 Techniques to Build Good Habits For Life

Or Maybe This One?: Use Creative Deliberate Practice To Build Better Habits

321 shares
Previous Post: « How to Actually Be Productive + Why Most Productivity Advice is BS!
Next Post: Inspirational Sayings and Aphorisms »