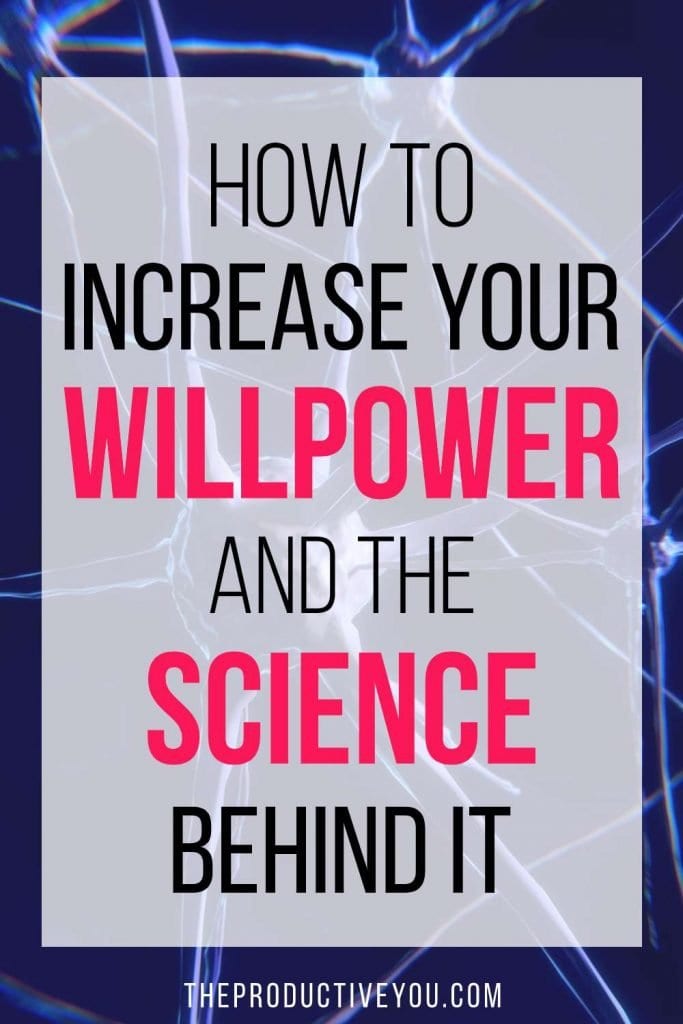 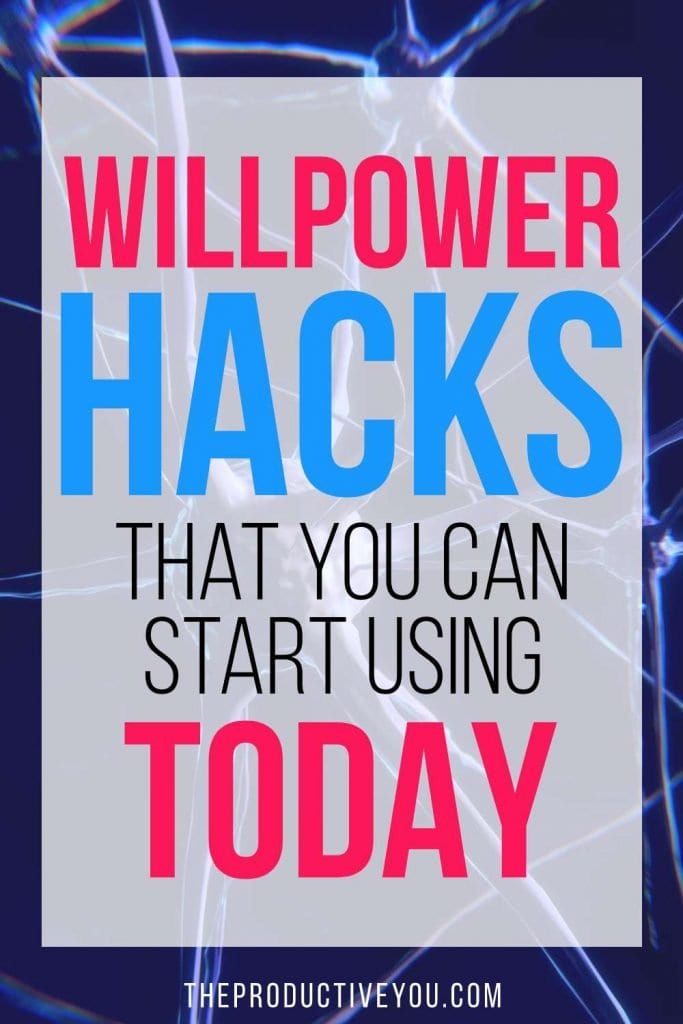 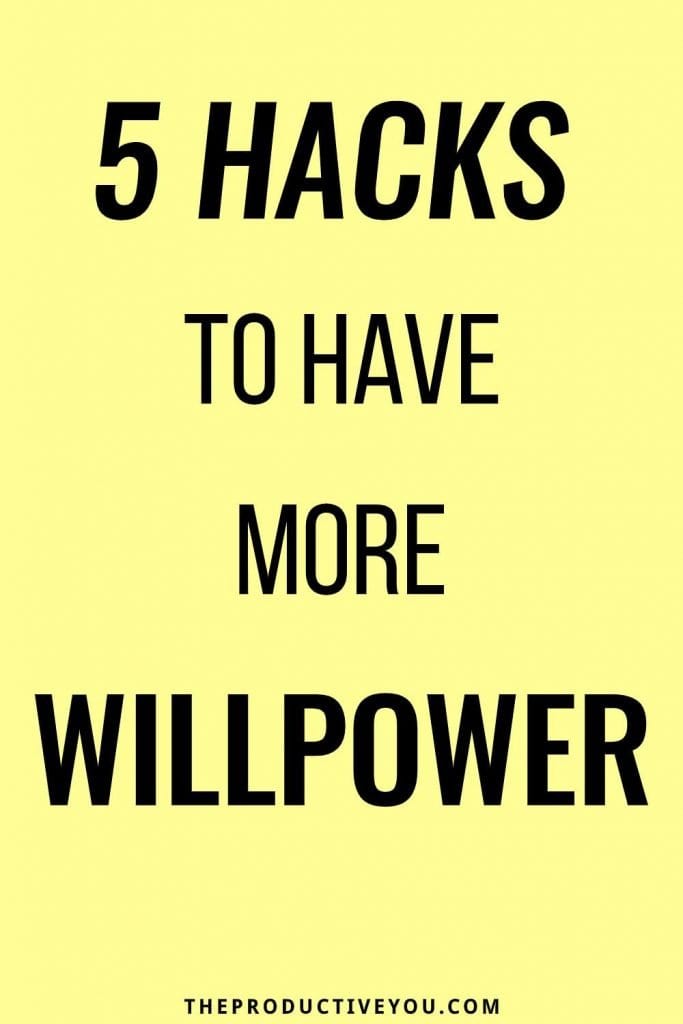 What do the following scenarios have in common?

Answer: Firstly, they’re all real quotes from me. Secondly, they’re all undesirable outcomes that could have been avoided if only I had more willpower.

And I’m guessing that you can relate to at least one of these scenarios yourself.

Which is why in this article you’ll learn exactly what willpower is (based on scientific studies), what controls it (is it a chemical, your brain, your fingernail length?), and how to have more willpower overall by following 5 practical tips.

Related: 7 Easy Habits for a More Productive and Happy Life

Related: 6 Tips to be Productive Consistently (more than just one day!)

Make no mistake about it, your willpower is the most important thing in your life. You use it every day and it affects every decision you make.

Are you literally reading this article right now? Then you’re using willpower (thanks for reading, by the way 😀) What about when you’re watching a YouTube video, or saving money, or setting goals and thinking about your future? You guessed it… they all use willpower.

In other words, it’s pretty important.

In the APA’s annual Stress in America Survey, participants said that a lack of willpower is the mainreason why they don’t make life improving changes.

Put another way, most us understand that willpower has something to do with our decision making, yet, very few of us actually know what it what is, let alone where it comes from and how to control it.

Luckily, those mysteries are solved right here in this article. Let’s start with the what, and then we’ll move on to the how. Buckle up, this is going to be fun! (at least for me, I love this kind of stuff!)

What Exactly is Willpower?

Willpower has many different names – such as self-control, self-discipline, and what the scientific community has deemed as “ego depletion” – but they all refer to the same thing.

Specifically, willpower is the ability to use conscious effort to overcome your automatic or habitual responses to stimuli.

Related: The Willpower and Motivational Principles of John Wick

For example, have you ever been in an argument with another person? Specifically, an argument where you’re fuming mad and want to retaliate, but don’t, because you’re thinking “screw it, just get me the hell outta here!”

If so, then, bam!, you actually used a whole lot of your willpower with that argument. And you did so in two ways:

First, you altered your desires. You wanted to retaliate but you chose to bite your tongue and move on instead; and this conscious decision to not follow through with your retaliatory remarks drained your willpower.

Second, you altered your emotions. It’s hard to stay calm during such an argument. So, you had to spend some time afterwards bringing yourself “back to center”, emotionally speaking. This, again, was a big drain.

Is Willpower a Depletable Resource?

The biggest takeaway you should get from this example is that your willpower is, indeed, a depletable resource. This is a very, very, important point because it means that every time you use willpower, you then have less of it available.

In other words, if you try to focus on a task (such as homework or going to work) after having an argument with another person, then you’ll likely find that it is much harder to complete your task with a high level of proficiency. There are ways to increase your willpower, but we’ll get into those later.

Think of your willpower like a car’s fuel tank. Every time you drive a car you burn fuel and thus have less fuel available later.

This information alone was a huge realization for me. I used to think that having a lot of willpower meant that you should be able to “will” yourself to do anything, regardless of the situation.

That couldn’t be further from the truth.

One of the first studies to demonstrate this “depletion effect” was done by Roy Baumeister. He tested participant’s willpower by separating them into two groups.

Afterwards, both groups were tasked with completing the same puzzle as a way to test their willpower.

The results found that group two did far worse on the puzzle than did group one. This is because group two depleted a significant amount of their willpower by resisting the cookies (desires and behaviors), and thus had less of it leftover to focus on the puzzle.

In another study, participants were tasked with first watching a short video (remember, focusing your attention on something, including a video, uses willpower.)

The results found that the participants who focused less on the initial video did better on the Stroop task because they had higher levels of willpower.

Based on these studies and numerous others it seems fairly clear that willpower is indeed a resource in and of itself.

But what exactly is this resource? Is there some sort of “magical willpower ooze”, possibly, of the TCRI variation? (it’s a teenage mutant ninja turtles reference)

More recent studies on willpower have concluded that it is, unfortunately, not determined by a magical ooze. Rather, it is directly correlated to your blood glucose levels.

To really understand this, we have to talk about the brain for just a moment.

There’s a nice area of your brain called the prefrontal cortex that’s located, unsurprisingly, at the front.

The prefrontal cortex includes a whole host of other areas and has a lot of important functions. Namely, it is responsible for moderating your decision making and your behaviors. And this is thought to be the area where your willpower comes from.

But wait, I already know what you’re thinking…

First of all, enough with the evil laughing.

Second of all, it won’t work.

Try and think of the relationship as an “enough vs not enough” type of relationship; if you don’t have enough glucose then you’re screwed, but once you cross the “enough” threshold you’re ok.

Also, there seems to be a cap – a limit where more glucose doesn’t increase willpower at all.

Also, also, blood glucose levels aren’t the end all be all of willpower. Other factors are known to affect it as well.

The Willpower Triad – Other Factors that Control Your Willpower

Numerous studies indicate that are three primary factors, other than your blood glucose levels, that affect your willpower – I call these the willpower triad.

They are your mood, the time of day, and how well rested you are.

For mood, being in a horrible mood surprisingly gives you more willpower…

The third part of the triad, how well rested you are, is simple: the more tired you are the worse your willpower will be.

The latter explanation would effectively make them just another component of the blood glucose levels and willpower formula.

Regardless, always keep the triad in mind when you have important work to do.

Your Thoughts and Beliefs – The Final Factor that Affects Your Willpower

But wait! A recent study has uncovered one more factor that affects your willpower that may supersede the triad, and even your blood glucose levels!

It’s your thoughts and beliefs on willpower itself!

And the results found that group one (unlimited resource) did far better on every willpower exercise than the participants in group two.

According to this new body of research, your thoughts and beliefs on how your willpower itself operates is the primary component that affects it.

5 Practical Tips to Increase Your Willpower

Whew. Now that we got through all of that, we can finally get to what you really came for: 5 practical things you can start doing today to increase your willpower.

Though, I hope that you found the above information enlightening. Because, remember, you can get all of the advice in the world, but if you don’t know why the advice works then it probably won’t do you much good.

Hack number one is to always start your day by eating a healthy breakfast, especially one that is naturally glucose rich.

Think of it this way: you fill up your car’s fuel tank when it gets low, right? Well, as we now know, your willpower operates in much the same way. So you need to make sure that your willpower fuel tank is always at the “enough” level to start your day.

You wouldn’t want to run out of gas while doing 60 on the highway, would you?

Hack 2 – Focus on Being in a Good Mood

Hack number two is to focus on being in a good mood instead of focusing on how to motivate yourself.

Absorbing motivational content can be fickle and unreliable. Instead, attack your motivation via the willpower triad and just focus on being in a good mood.

Do whatever it is that you need to do in that moment to be in a good mood, and your willpower will naturally follow suite.

Hack 3 – Connect Your Task to a Core Inner Belief

The third hack is to connect your task to a core inner belief or value.

Your willpower will be especially negatively impacted if you are only doing a task because you have to, or because someone told you to do it.

So dig deep, and figure out a reason that’s important for you to do your task.

Hack number four is to take a break and eat a healthy snack if you feel it getting weaker.

You’ve probably heard this one before, but hopefully now it’s more than just something your mother told you.

Healthy snacks are high in glucose, and glucose is high in what? (Willpower!)

Fruits, especially apples, bananas, and grapes are all great options. Personally, I keep at least one honey crisp apple laying around for when I start to feel fatigued.

Hack 5 – Believe That Your Willpower is Unlimited

The fifth and final hack (for now) is to convince yourself to believe that your willpower is an unlimited resource.

So, if you believe that it is an unlimited resource then you will be able to push through the early stages of fatigue, and it will ultimately last much longer.

Now, get out there and conquer the world! Good luck, we’re all counting on you.