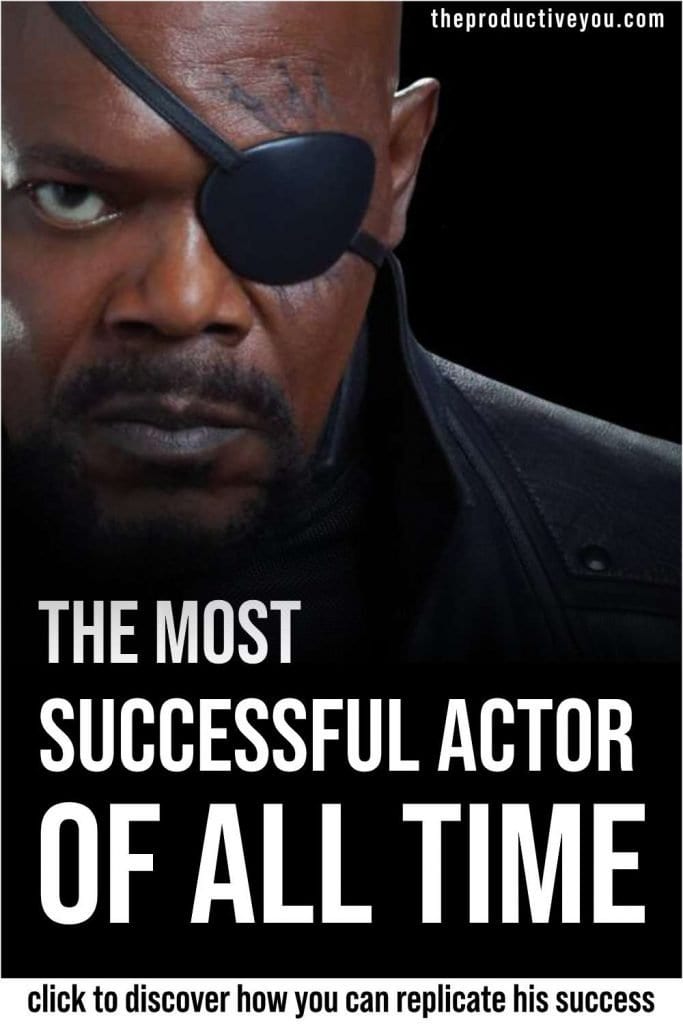 Your work ethic is an integral part of your overall productivity. If you want to get more done (and ultimately have more time to do the things you actually want to do) then you must develop the ability to work hard for sustained periods of time – we’re talking months, and even years here.

For this article I analyzed Samuel L. Jackson’s past achievements, interviews, and statements, and compiled them to create Samuel L Jackson’s 5 principles for how to have a better work ethic. So if you want to learn how to work as hard (and maybe be as successful) as Samuel L Jackson, then all you have to do is read on…

Before we get into it, I’d like to define the self-serving bias because I’ll reference it throughout the article.

In a word, the self-serving bias is ego.

It’s your tendency to give yourself credit for your successes, but to blame your failures on external circumstances. In other words, it’s any process that is altered by the need to maintain self-esteem, or the tendency to perceive yourself in an overly favorable manner.

This bias has a big effect on your work ethic because it can alter your perception of how hard you’re actually working, as you’ll see later in the article.

Sam was born in Washington, D.C. to Elizabeth Montgomery and Roy Jackson. He was primarily raised by his mother and her parents. He seldom saw his father, who was a notorious alcoholic and died from the disease while Sam was relatively young.

Growing up, Sam suffered from a serious stuttering problem that (sometimes) affects him to this day – that’s right, the most successful actor in the world has a stuttering problem, if that alone doesn’t inspire you then I don’t know what to tell ya.

Starting in his young adult life, Sam took a very active role in the civil rights movement. He originally planned to study marine biology in college, but switched to acting after joining a local acting group. He has been acting (and making some serious $ dough $ from it) ever since.

Work Ethic Principle 1 Show Up, No Matter What

The first principle that undergirds Sam’s work ethic is his ability to show up, no matter what. Come rain, sun, snow, or drug addiction, Sam went to the theater every day.

That’s right, Sam used to suffer from a serious drug addiction. His drug of choice was “whatever was available”, including copious amounts of crack. Remember, Sam’s father died of alcoholism, so it’s possible that addiction runs in his family.

It also doesn’t help that one of Sam’s professors was a proponent of alcohol and drug use as part of the acting process:

Make no mistake about it, the point I’m trying to make here is not about Sam’s drug use, rather, it’s about his ability and willingness to work regardless of his drug use.

How many times have you thought “I’ve had a hard day; I’m just going to call it quits and pick up again tomorrow…”? I know I’ve made that excuse plenty of times. But the thing that separates the high performers like Samuel L Jackson from the rest of us is that they’re willing to work regardless of how they’re feeling or what they’re doing outside of work; they show up, no matter what.

Sam’s breakout role came from the film Jungle Fever (released in 1991) where he played the crack addict character Gator. Ironically, Sam started playing this role mere weeks after attending rehab and kicking his own drug addiction.

You see, Sam understood that he couldn’t work hard (and thus be successful) while remaining a drug addict; he had to change. In fact, Sam credits much of his success to the fact that he attended rehab and got clean:

“Once I got clean everything kind of changed… there’s a very distinct correlation of me changing my life and being focused and clear about what I needed to do, and my success.”

Related: Strategies to be Productive CONSISTENTLY and Avoid Failure

Understand: when you’re building a work ethic the first principle of “showing up” will only work for so long. Yes, it’s important to push through adversity… but eventually it becomes even more important to shift your lifestyle so that you avoid adversity when it’s unnecessary.

I’ve never been a drug addict myself, but I have noticed that whenever I reach a new tier of success it’s usually because I altered my behavior in some way – I stopped banging my head against the wall and shifted to a strategy that actually works. Sometimes this means doing something different myself, and sometimes it means getting help from someone else. (By the way, if you think that you might need help, I offer personalized productivity coaching.)

Now, remember the self-serving bias? It’s especially important with this principle because it would have been very easy for Sam to blame his addiction and his failures on someone or something else. Luckily for us, however, he was able to address his addiction and get the help he needed.

So, the ability to adapt and change is essentially the ability to overcome the self-serving bias. It’s not always easy, but as Sam has demonstrated, it’s definitely possible.

The third principle that has allowed Sam to work so hard for so many years is that he was a part of a supportive community that shared his values and his goals.

It’s really easy to fall into the trap of thinking that you can do everything yourself, and that you don’t need the help of others. Just think about how many times you’ve tried to brute force your way through a task when you know you should ask for help (I, for one, do this way too often, but it’s something that I’m working on.)

In Sam’s case, his community was his acting friends and the people he performed plays with (people like Morgan Freeman, Wesley Snipes, and Denzel Washington.) His community helped him to focus and work hard, even when times were rough.

The ideal community is one that you can lean on when you’re feeling unmotivated and don’t want to work.

Also important to note is that there should be no enmity or jealousy in your community. If there is then the community will likely hurt your work ethic more than it will help.

Work Ethic Principle 4 Love What You Do

The fourth key to Sam’s work ethic is that he loves acting. Remember, Sam started acting in college, but he didn’t have his breakout role until the film Jungle Fever, which premiered when he was 43 years old.

Now, it’s hard to imagine that Sam would have stayed committed to acting for so long if he didn’t absolutely love it (I mean, seriously!, he was acting for over 20 years before he had his first “major success.”)

This is an important lesson, especially in this day and age because it seems like most people are only chasing a “quick buck.”

But Sam reminds us that if you don’t really love what you do, then you’ll probably never get the “quick buck” – simply because you won’t have the patience to see it come to fruition.

“I enjoy what I do. I make choices that will be enjoyable for me so that when I show up for work I show up enthusiastically and ready to do it…”

Remember that if you’re working on a project that will take months, and even years, then avoiding burnout is very important. And loving what you do seems to be the most effective way to avoid this burnout.

The final principle of Sam’s work ethic is an extension of loving what you do, and it’s to enjoy the final product.

Sam loves watching his own movies and he loves seeing himself on the big screen. Which makes sense, because if he didn’t love what he was creating then he likely wouldn’t be motivated to work hard on those creations.

Just think about that nagging geography paper you had to write in school (sorry geography majors!) and how unmotivated you were to work on it. You didn’t enjoy geography and you knew you wouldn’t care about the final product, so you naturally weren’t incentivized to work very hard on it.

In other words, by associating the completion of your task with positive emotions you’re more likely to complete similar tasks in the future.

For example, if Sam became an angry curmudgeon after ever film then he likely wouldn’t have created very many of them (let alone nearly 200.)

So the next time you finish a project, take some time to reflect on it and enjoy the final product; because by doing this you’ll be more likely to have a better work ethic with future projects.

29 shares
Previous Post: « What is the BEST Productivity Tool? Habit Trackers vs Journals vs Spreadsheets
Next Post: How to Turn Evernote into an Automatic Reminder or To-Do List App »