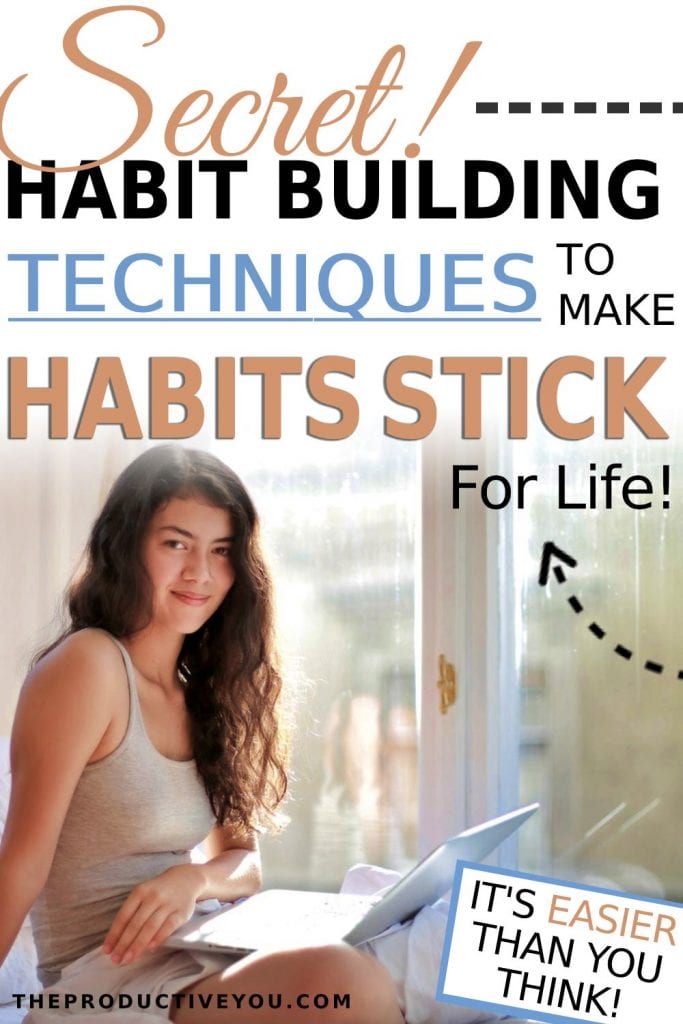 We all have a picturesque version of ourself that only exists within the confines of our minds; an ideal self who has good habits and a joyous disposition.

And this ideal self is always just barely out of reach because we don’t have those good habits, or, at least, we can’t make them last.

It’s like when you get the “awesome” idea to buy a 40,000 piece jigsaw puzzle, only to realize that you don’t actually have the time to complete it because 40,000 is a lot of god damn pieces.

So I’m going to give you 5 easy techniques you can use today to finally start building good habits and become the person you’ve always wanted to be.

1. Start With one Habit at a Time

I recently spoke with a reader named Camila. She was very enthusiastic about her self improvement, and had started 5 new habits only 2 days prior:

While I admired her enthusiasm, I told her that 5 habits is a bit ambitious. It’s generally best to start with only 1 habit at time — any more than that and you’ll be more overwhelmed than a single parent of four juggling two part-time jobs and evening college classes.

The point is that new habits are very major life changes, and thus should not be taken lightly.

In fact, the very act of calling an activity a “habit” implies that you want to do it for the rest of your life, or at least for the foreseeable future.

So I love your enthusiasm, Camila, but only commit to starting one habit at a time because even something simple like daily flossing requires a lot of discipline and mental energy.

Your timeline is how often you want to practice your new habit; it’s your recurring goal.

If your timeline is too short then you risk overwhelming yourself and losing motivation, if it’s too long then you’re not really developing a habit at all because you’re not doing it enough.

Most people default to a daily “cold turkey” timeline.

This “cold turkey” timeline, as I call it, is possible, but it’s not always the most reliable, nor is it the most practical.

It puts an enormous amount of pressure on you very quickly because missing even a single day might start an irreversible downward spiral. And considering that starting a new habit is a major life change, it’s folly to assume that you can go from zero to one hundred in just a day.

Instead, you’ll be much better off if you view your habits on a weekly timeline like this:

You’ll alleviate the burden of being perfect every single day and allow for some “wiggle room” in your hectic schedule.

Just be careful that you don’t use too long of a timeline. Meditating for 5 hours every 6 months is better than nothing, but it’s hardly a habit.

It’s easy to get overzealous when starting a new habit because the prospect of building a better life sounds so damn good in the moment.

But if you go too hard too fast then you’ll burn yourself out (or worse just fail entirely), and that “better life” will be nothing more than a passing fancy, floating just out of reach like so many scraps of paper on a windy day.

In fact, you should start so low that it’s almost silly.

Continuing the examples from above, here’s how you might start low:

Indeed, these goals are so low that I’d be willing to bet anyone could do them.

(Keep in mind that you shouldn’t start all of these habits simultaneously. I’m only using 3 to provide multiple examples.)

The key is that you continue to build upon the habits, increasing the difficulty week after week.

Up and up the goals go until you reach something that has a significant impact on your life but is still sustainable.

For some of the more banal and ordinary habits, try using a technique called creative deliberate practice.

A key component of this regimen, and in my opinion the reason why he was so successful, was that he always held himself accountable, no matter what.

In one particularly inspiring interview he talked about how difficult it was to travel with teammates who had a predilection for partying, women, and late nights.

After much coercion Kobe finally agreed to go out with his teammates, but under one condition: “I’ll go out with you tonight, stay out late, and do your thing,” he said, “but in the morning you have to do my thing. And when I’m banging on your door at 4am you better be ready because we’re going to do the hardest workout of your life.”

Simple. Unrelenting. Accountability. No matter what.

Now in all likelihood you’re not an NBA legend so you don’t have to be as dedicated as Kobe was, but you do have to have some form of accountability — that is, a tool to track your habits and ensure you’re making progress.

Pop quiz: how many days does it take to form a habit?

we don’t know for sure, and more importantly, it doesn’t matter.

What we do know is that habit creation isn’t instant, and what does matter is that you’re prepared for the long-term — because odds are that you’re going to fail at least once along the way.

Don’t get discouraged, though, because failure is normal and even expected.

Hell, even Kobe Bryant failed when he missed his very first 3 point attempt ever in the NBA (on live TV in front of millions of people, mind you.)

So you need to plan for failure, and you need to know exactly what you’re going to do when it happens so that you can recover quickly.

For example, take a moment and imagine your future self failing your new habit for the first time.

What do you do?

Now, mentally erase all of those reactions and replace them with calm acceptance: you just failed, but you’re not going to give up.

Instead, you’re going to analyze what went wrong, formulate a plan, and then try again.

A concrete plan is the soothing aloe vera gel applied to the burn that is failure.

Keep these 5 techniques in mind as you build new habits and maybe, just maybe, you’ll finish that 40,000 piece puzzle after all.

154 shares
Previous Post: « How To Kill Procrastination Forever
Next Post: How to Actually Be Productive + Why Most Productivity Advice is BS! »